How watching a Samuel Leeds’ video changed a couple’s lives and gave them peace of mind during lockdown!

How watching a Samuel Leeds’ video changed a couple’s lives and gave them peace of mind during lockdown.

Dean Shooter and his partner Maria Meissner sat down one Friday evening over a glass of wine and watched a video by Samuel Leeds about how to make money from rent-to-rent deals. They had never heard of the strategy before, despite running a property maintenance company, and were quickly hooked. That night changed their lives.

The couple stayed up until 4am discussing what they had watched and over the following weeks immersed themselves in all of Samuel’s free YouTube content.

“At first we thought, who is this guy shouting about property and what the hell is rent-to-rent?” said Dean.

Dean and Maria had already been considering investing in property and had saved up £15,000 with the intention of using the money for a deposit on a house. Instead, they decided to concentrate on finding a rent-to-rent or lease option deal. That was in September 2019.

Eight months later they are earning ‘just shy of £3,500 a month’ from two house shares in the Nottingham and Derby area. If this were not enough, they spend just four hours a month managing the properties after learning how to systemise the rental process.

They say rent-to-rents have given them ‘freedom and security’, especially at a time when, because of the lockdown, their income from construction work would have dried up.

The pair secured their first rent-to-rent deal through a landlady for whom Dean had previously done some maintenance work. Maria spotted photographs of the house being re-advertised on Gumtree and within four days they had signed a management agreement.

Dean said: “I had the landlady’s phone number and rang her directly. She gave the house to us to manage straight away because we already had a bit of a rapport with her. I showed her a rent comparison scheme I’d made, and she could see she was better off each month with us than with the letting agent she had been using.

“She gave us the keys to it and we’ve never looked back. That one nets us about £996 income a month off a four-bed.”

Under the agreement, Dean and Maria pay the owner a guaranteed monthly rent and let it out at a higher rate, retaining the profit. They paid the landlady a month’s rent of £800 upfront and spent just under £3,000 on renovating it, doing a lot of the work themselves. The finished décor is high-end and there are televisions in all the rooms.

Six days into the refurbishment they signed a similar deal for another property, again advertised on Gumtree, and carried out a full redecoration, changing the carpets and upgrading fittings. As part of their maintenance business, they had £30,000 of credit with trade outlets which they used to carry out the improvements.

They finished improving the second house two days before the lockdown was imposed in March and three tenants moved in shortly afterwards, having viewed it beforehand. Since then all their rooms have been fully occupied.

Dean and Maria also tapped into Samuel’s network of 28,000 property investors on his Facebook group by entering into a joint venture with one of the members. They lent the investor £3,000 and within two months he had paid it back with 20 per cent on top. He is also paying them £150 to £400 a month for the next five years from the proceeds of the project. This income is entirely passive.

Dean’s only frustration has been that he did not learn about the rent-to-rent option sooner.

“I’ve been around HMOs for the best part of a decade, building up to 18 bedrooms for other people. We knew them inside out. All we didn’t know about was rent-to-rent. I’m 35 now. I could have been doing this for ten years. Just that one little piece of the puzzle changed everything.

“I think the hardest pill to swallow was that we owned a maintenance company. We were working for Countrywide and some of the large letting agents and still didn’t know what rent-to-rent was. The amount of times I’ve been in and out of all the estate agents asking for work, picking up job sheets and giving it to our staff. We could just have taken the profit ourselves really.”

How advanced training could have helped them even more. 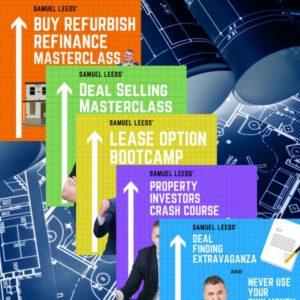 Samuel Leeds is a passionate advocate of his own advanced training, having coached and personally interviewed many students who have become successful property investors as a result. He is also regularly stopped in the street by investors who say they have become financially free by watching his YouTube videos which have received more than 14 million views.

“But people who come on my training say they benefited so much more from taking that extra step. Some say they could have got there without it but still believe the training was definitely worthwhile because they learnt such a lot. They made connections, got there quicker and crucially are making more money.”

“Dean and Maria have done incredibly well but, if they had done some of my advanced training, they would have discovered how to package and sell the deals they came across that didn’t work for them. They would also have made more contacts.”

Dean studied quantity surveying at university before going into business. He admits they have missed making connections with other like-minded people on their journey.

“This has been quite a lonely way to get through it because we haven’t been around that many people doing the same thing. We were trying to explain it at Christmas to a lot of our family members. It’s so difficult. Then, when you meet people already in property, it’s like you speak the same language. It’s much easier to get things across.”

Maria said: “Without our rent-to-rents we’d be absolutely screwed now because construction stopped for two months. We cut back our staff before it all happened, so we’ve got no debt as a result.

“Before we would have to work to get everything ready for our staff, so they knew what to do. We’ve got the assets working for us now and they never sleep. This feels safe.”

Dean agrees: “They’re never ill. They don’t throw any sickies. They always pay out. Sometimes a few rents may be late but we’re not in arrears with anybody.”

He added: “We work together and play together but this has just freed up so much time. The dog gets walked in the daytime now every day and I don’t dread Monday anymore. I don’t even look towards Friday because every day has got the same positive outlook when you wake up. You know you are secure.”

Maria: “If you really want to succeed, just get on with it. Don’t find excuses. Just get out there and get yourselves deals because you might ask 200 people and that last one might be the one that says yes.”

“In the beginning, the hardest thing I would say was the belief. You have to believe it’s going to work.”

“I would say if you have no idea about property go and get trained.”

Dean: “The hardest part of the process for me was finding the right deal and landlord. We’ve probably failed more times than most people have tried, so you don’t celebrate your failures because there are so many of them, but they always lead to a success in the end.”

“People learn differently. Some people need to be trained. I spent the best part of £30,000 at university on a quantity surveying degree, but it’s probably not as valuable as having some property training if you’re the sort of person who learns from direct training.

They both agree confidence is vital. “I would say sales is a big part of it. We talk about the value we can offer to the landlord. That’s the biggest thing,” said Dean. “We do absolutely everything, so it’s purely hands off for the landlord. I’ve never even called or emailed landlords through the pandemic because why should we?” “We guarantee them that rent which will never change. We’ve never struggled to pay them.”

The outlook for HMOs

Samuel Leeds is optimistic about the HMO market, despite the lockdown which has caused problems for some rent-to-rent entrepreneurs:

“I think the pandemic is going to help HMOs. The reason some people have struggled with HMOs is because they’ve sadly been unlucky and had people move out. Because of lockdown, they can’t remarket the rooms because you can’t view properties and so then they’re stuck with their properties.

“However, looking to the future, as people have less job security and are trying to cut down their expenses they’re going to downsize and move into house shares. There is also an over population of people and with Article 4 coming in it’s really limiting the number of people who can start up HMOS unless you really know what you’re doing. So the demand for rooms for rent will rise.”

Dean said: “With the pandemic we were really unsure whether we were going to survive. A lot of people have been leaving rooms, but we’ve had a positive cashflow the whole way through it.”

Dean has already seen a potential opportunity close to home to do more-rent-to-rent deals on HMOs. “I think there might be quite a few empty student properties coming on, especially in Nottingham with its large student base. A lot of them have gone back. They don’t know if they’re going to start their courses again this year. So what are the landlords going to do?

“Nottingham is a good area because it commands quite a high rental income per room. There is an Article 4 direction in place in the city, but not in the surrounding villages.”

To find out more why not register Now for one of our FREE online training events. Click Here

Serviced Apartment Tour in Reading | £1000’s Cashflow from Property You Don’t Own!